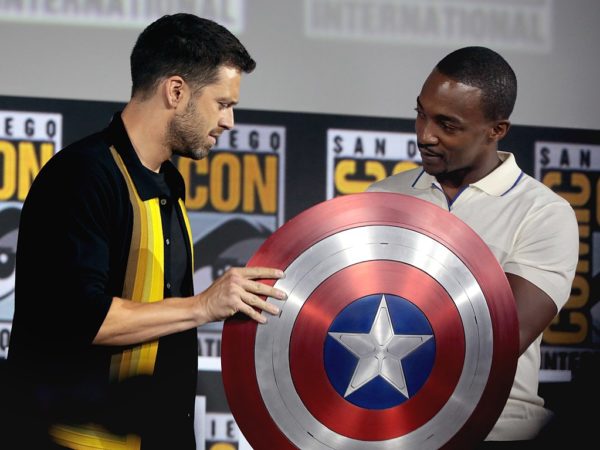 Captain America: Winter Soldier is a masterpiece. Captain America and the Winter Solider aka The Falcon and the Winter Soldier, is very different from its namesake and therefore cannot exactly be compared 1:1. The former was an action-packed political thriller and a story about two friends. The latter could be described the same, but the themes are very different. While Stever Rogers’ story focuses on the corruption of the country he fights for and a huge government conspiracy, Sam Wilson’s story focuses on a bottom-up terrorist organisation fighting against an unjust global system, which also includes persistent racism. Besides that, the sheer length of the six-hour Disney+ show makes a comparison to a single blockbuster rather pointless. Nonetheless the show delivers on very many levels.

The following section contains spoilers for the show.

The Falcon and the Winter Soldier dives deep into two characters that were introduced in Captain America: Winter Soldier, namely Sam Wilson aka the Falcon and Bucky Barnes, who returned as the brainwashed Winter Soldier. The feature films in the Captain America and Avengers line never had a chance of allowing all of the then secondary characters to be fully developed. Just as Wanda Maximoff needed WandaVision to be fully fleshed out and achieve her dormant potential, Sam and Bucky needed this show. It is the little things that make this show such a delight to watch. From the opening scene, in which Falcon performs the greatest moves of his on-screen career (against the same antagonist Steve Rogers fought in the opening scene of Winter Soldier no less!), to the nightmares Bucky is haunted by every night, there could not be a better opening. The first plot twist occurs within the first minutes of the show. Sam gives up the shield Steve Rogers gave him. Every character is asking the same thing as the audience? Why? Why won’t you just be the new Captain America? Steve chose you.

This is a great and subtle way to introduce the main development arch for Sam Wilson. He can’t just be named Captain America, not even by Captain America himself. He has to earn it. And that goes not just for him, as a character, but also for us as an audience. We must get to the point, where we feel like Sam Wilson is the only one fit to take up the mantle of Captain America and the show does a wonderful job of doing just that. Not only through Sam Wilson, but also through John Walker, the pretend-Captain America, chosen by the US government. He was chosen to be Cap, and fails spectacularly at it, despite fitting all the criteria perfectly on paper.

Sam and Bucky start out from a bad place, of doubt, distrust and animosity, only reinforced by the appearance of Walker. But over the course of the show, they grow increasingly close. While I hope that their signature bickering they put on full display early on, will find its way back again onto the big screen, their evolution from “guys who used to know the same guy and now are just guys” into true comrades is truly satisfying.

Sam Wilson begins the show in the same mood as the audience. He is an Avenger. He is doing really well and there is no way he cannot succeed at everything he sets out to do, except maybe be Captain America, as that is a burden he does not believe he can carry; yet. Soon enough, Sam learns that being an Avenger does not mean anything if you are poor, black and have been gone for five years and therefore don’t have any credit history.

As Bucky’s attempts to get him to take up the shield escalate further and further, he learns the terrible truth about Isaiah, a black Vietnam war veteran, who also received an experimental version of the super soldier serum. Instead of parades, he was put in prison and experimented on in order for the government to find out what went right with him.

A black Captain America and no one has ever heard of him, because history is revisionist and tends to do that to black people in America. To further reinforce the point, while arguing outside Isaiah’s house, a police patrol rolls up and the two white officers pull their guns on Sam and ask Bucky if he is being threatened by him. The officers thankfully realise their mistake, but the point of racial profiling is properly shoved down our throats to the point where it gets very uncomfortable to watch. But that is the reality that black people in America face everyday. So it is okay that this scene makes the audience uncomfortable.

Sam’s story reaches its crescendo, when he tries to talk down Karli Morgenthau, the leader of the global terorrist movement that aims to keep the world borderless. He admits that he sympathises with her cause. The world is indeed a better place without borders and without nations that were built or destroyed through centuries of war and colonialism. But just because the world isn’t the way it ought to be, you don’t go around blowing up refugee centres to make your point. Because in doing so, you prove to the powers that be, that they are right about you. Sam’s final speech on television is so powerful, because it does not force an agenda on anyone. It is not about just people of colour, or just black people, or just the people being displaced by the GRC, everyone has to come together to find solutions and rebuild together after the Thanos snap. The Blip affected everyone in different ways, but it affected everyone. As he says “we finally have a common struggle”. The world has something to unite behind as one community. And the question is, will the people in charge make the decision that the people of the world want them to make, or will they choose to divide everyone again, in the interest of a few, who probably lobbied for it and would stand to gain quite a lot from returning to the old status quo. The message is very powerful and it is delivered so exceptionally well by actor Anthony Mackie, because he himself believes in it. Have a look at this interview from 2015, where he lays out his feelings on racial profiling and the lack of genuine conversation around racism.

The main problem the story suffers from, is the vagueness of the state of the world post-Endgame. Endgame showed us a lot of devastation and abandoned cities. It appeared as though the world was falling apart. Now we learned that the world is, to some extent, thriving, because most poorer countries basically closed down and moved to richer countries, where the people were welcomed with open arms to fill the gaps of those who disappeared. So how exactly did that work for five years? And how is it going to work now? Which countries are affected how? How does the economy work? Were there no cultural issues in integrating such large numbers of people essentially moving half a country into another half of a country? There are so many serious global questions about the world setting post-Endgame, that we really need an even smaller-scale MCU show that explores not our heroes and villains, but what ordinary citizens are going through in this universe. But I digress.

Bucky also gets a lot to do, whether it is breaking Zemo out of prison, interacting with the warriors of Wakanda, or making up for the sins of the Winter Soldier. To top it off, he also turns out to be a great friend and ally to Sam and an essential part of the comedic duo they form, and surprisingly displaying fantastic chemistry with Zemo too.

Finally there is the return of Sharon Carter, who had basically disappeared after Captain America: Civil War after having smooched Steve Rogers, who ended up going back to the past to be with her aunt. Yikes! Kind of glad that is actually never addressed in the show. Yet Sharon appears to have taken her abandonment by Steve, Sam, Bucky and basically everyone else, including her own country, just a little personally. While she is helping out our merry band of heroes and villains, she turns out to be a villain herself, namely the Power Broker of Madripoor. Sharon gets the final word in the after-credits scene, where she is pardoned and reinstated as a CIA agent (or potentially a S.H.I.E.L.D. agent if that is a thing again? The show remains suspiciously vague about this) and calls her contacts to inform them that she now has state secrets to sell. Will Sharon Carter be redeemed or will she in fact be the next big villain in the new Captain America film series? Of course there is also Zemo, who finally gets a mask, puts down some sick dance moves in the night clubs of Madripoor and likely has not disappeared from the MCU for long again.

Overall, the show delivers a fun, action-packed and deeply political ride that firmly fixates Sam Wilson as the new and only Captain America, which to me is surprising, because the Falcon was never particularly high on my list of favourite characters, but this show managed to change that and put Sam Wilson up there with Steve Rogers and the rest of them. The only nitpick I have at the end is with the shift in the title at the end of the final episode. It changes The Falcon and the Winter Soldier into Captain America and the Winter Soldier. But by the end of the show, Bucky is fully back and feeling like himself. So it would only be fair to no longer call him the Winter Soldier either, now wouldn’t it?