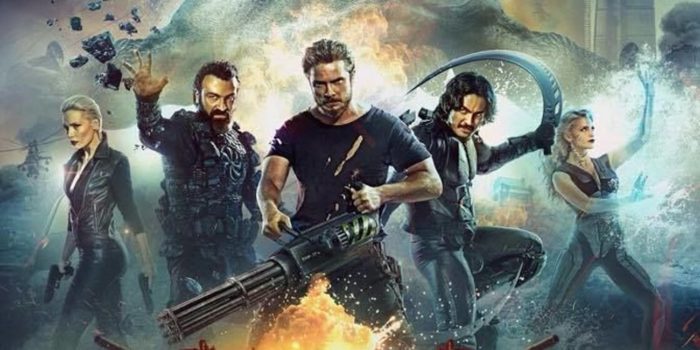 (At least I hope it is meant as a spoof…)

Guardians is one of those really weird high-budget films that doesn’t act like it deserves its high budget. Let’s get right down to it. The film has the feel of a major blockbuster film, but at the same time the writing is so bad, you cannot take the film seriously. And it is all down to the bad writing. The acting, for the most part, is pretty okay.

The film opens with an action sequence and no dialogue or narration whatsoever. We are introduced to the film’s villain, as is the cliché these days. But we know literally nothing about the guy, except for the fact that he is a hideous murderer and his upper body is way too big and muscular for his tiny feet and he gets a hillarious walk as a result. Poor actor. I mean, it kind of makes sense. His whole evil plan is to make the biggest phallic shaped object in all of Russia and use it to take over the world.

After all the action, we end up in a Russian clandestine version of a European Commission board room, where some military guy reads a bunch of exposition about the bad guy, completely out of context and without establishing any links or reference points for the viewer. In the English dub version, this is also the moment, when you notice that the voice over is not particularly great and the lip syncing is completely off.

By the way, this film plays in an alternate version of the world, where we have the glorious Soviet world state that is being run by the military from Moscow, apparently. Just in case you were wondering about how much propaganda would be in this film. Not a lot, just that bit, really.

The camera keeps going back to the one woman at the table (Valeriya Shkirando), whose only reaction is that of someone intensely listening and occassionally nodding along to it. We don’t know who she is, what her name is or what her position in the military is. We only find out at the end of the scene, that, whoever she may be, she is now in charge of some project.

Basically, she is Nick Fury and needs to go assemble the Avengers. Also, she is hot and blonde. Every woman in this film is hot and blonde. If there is one woman in this film that isn’t, I must have missed her and I apologise profusely, but my viewing party noticed only hot blondes on screen. Possibly, because the camera kept giving us ass-shots, whenever a woman got some screen time.

Anyway, Elena (as we find out much later) goes off to recruit the Guardians.

She goes to Armenia, where she meets Lernik (Sebastien Sisak), who has secluded himself in a monestary and as such is wearing Jedi robes. His superpower is to lift rocks with his mind (so he is a master of the Force, if we are to believe Rian Johnson). She walks up to him, takes off her super cool sunglasses and tells him he is being drafted into the Guardians. He lifts rocks at her, let’s them fall and then they stare at each other intensely. The tension is so thick, you could cut it. Then he tells her he now goes by “Ler”. That’s right, his name is Ler. Try not to laugh out hard at that moment in the film. I dare you.

Anyway, they go to collect the rest of the Guardians. Ler says ‘sup to Khan (Sanjar Madi) and they immediately team up to find the bear (Anton Pampushnyy). You’d think a guy who is literally morphing into a giant bear and can go “full-bear mode”, would be called Ursus (i.e. Latin for Bear), but they went and called him Arsus. Yes, Arsus. It is short for Arseniy. He literally has the word “arse” in his name… He also has the magical ability to retain his pants, whenever he turns into a bear and back. I mean the pants literally appear on his body from underneath his fur. How is that even possible? It is one of the most unlikely and most useful superpowers ever.

Then we are introduced to the final member of the Guardians, Ksenyia (Alina Lanina). She has the power to walk on water and turn invisible. And she is a decent hand-to-hand fighter. She proves as much as she has no memories of her past and attacks the Guardians, as they try to recruit her. They finally convince her to join them in the hopes of finding out what really happened to her. She is basically there to look pretty and confused throughout most of the film.

The rest of the film is a series of superhero and action movie clichés and funny backstories that get narrated to us at different intervals throughout the film. The funniest part to me was when the Guardians immdiately got beaten and captured during their first mission. Ksenyia is dumb enough to walk through enemy lines while it is raining. So soliders see the water collecting on her invisible skin. They shoot a pipe and she gets frozen in place. Arsus and Khan go berserk on the enemies, kill a lot of them, then get captured, by having nets thrown on them. Oh, did I mention Khan can teleport? Yeah, no, not through a simple net… Meanwhile, Ler faces the big bad, Kuratov, and loses badly. Kuratov breaks his back, like Bane did to Batman and leaves him for dead. This gives Elena and her S.H.I.E.L.D. knock-off team the time to rescue him, infiltrate the enemy base, steal their secrets and fix Ler’s back with a magic cure.

The final confrontation ends in defeat for the heroes. Until the amazing Elena shows up on her motorcycle, all dressed in black leather and ready to give them a pep-talk. She tells them about the fact that they can actually combine their powers to become even stronger. It would be dangerous, but they have all lived for over 200 years, so none of them really care if they live or die, cause their grandkids’ grandkids are already dead…

If you are expecting a Power Rangers Megazord moment now, you will be disappointed though. They just yell at the screen while they forcefully poop out a CGI-bomb a lá Kamehameha, which blows up the entire building and sends Kuratov hurtling to a pathetic death.

The lesson of the film? If you can’t beat your enemy, just nuke them from afar.

I would highly recommend Guardians as a spoof. It is incredibly funny. But one cannot take this film seriously. The writing is simply too god-aweful. It is a shame too, because I am pretty sure the actors could do very well with a better script and direction.