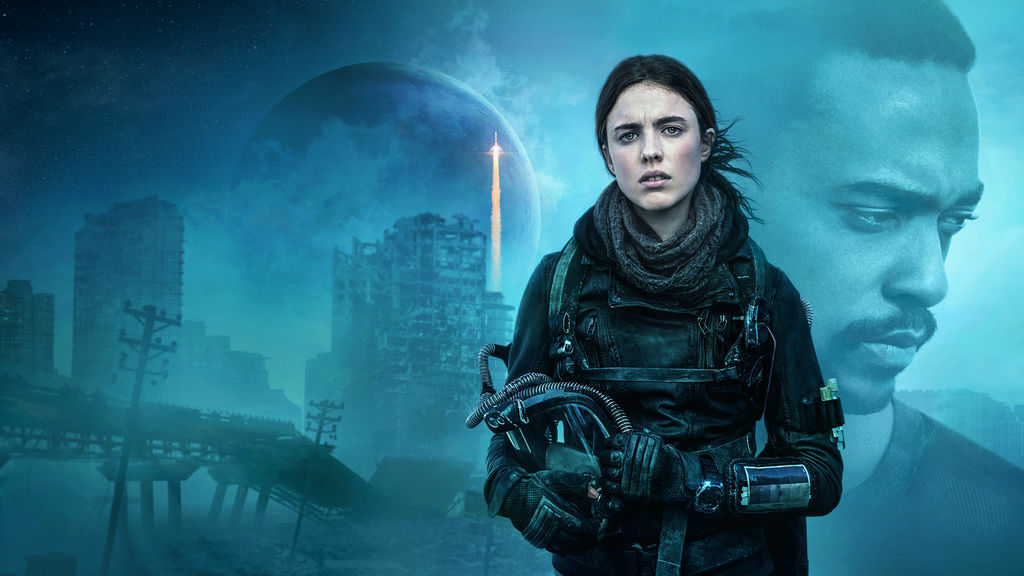 Thus far, Netflix only counts 13 original Sci-Fi films their own. It is all the more disappointing that one of their newest entries, IO, is a big letdown.

The concept is great. We meet Sam (Margaret Qualley), a young woman (probably in her early twenties, but not quite clear) and one of the last people on Earth. The majority of the world has abandoned the planet and gone to IO, one of the moons of Jupiter. From there, they are launching expeditions to exoplanets in other solar systems to find a new home for humanity.

Meanwhile, Sam is stuck on Earth, studying the remaining vegetation and animal life, hoping to find proof that the planet’s decaying ecosystem might be able to recover.

The premise at the outset is basically the reverse of The Martian. But unlike that film, IO is incredibly sterile. After we are wowed by the premise and hauntingly scary views of a ruined city, covered in vines and darkness, we find ourselves in one of the weirdest and literally lamest films in recent years with an incredibly mixed message that doesn’t make any sense whatsoever.

Spoilers from here on out, but I encourage you to read on as my verdict is simple. Save yourself some time and don’t watch this. If you are still not convinced, let me explain why IO is not worth your time.

The story is supposed to pick up pace, when Micah (portrayed by the amazing Anthony Mackie) shows up out of nowhere in his weather baloon. He is here to get Sam and her father Henry to the last shuttle launch to IO. Micah believes that Henry is still around, because he heard his radio transmissions. But the viewer already knows that Sam is the one that sends recordings of her father out on the radio. So there is no suspense and no reason for the viewer to buy into her half-assed lies about her father’s whereabouts. It is quite clear from the first two minutes of the film, that Sam is alone and whoever might have been around her before was dead. But the film spends about half an hour on this supposed plot twist.

Sam is also in a long-distance relationship with Elon, whom we never get to see, because he is on IO. And we never see IO. Not during the film or even at the end. IO is just a MacGuffin and the title of the film that gets constantly name dropped, but has absolutely no meaning whatsoever for the film or its story.

As time goes by, it becomes clear to us that Elon won’t wait around for Sam any longer and is going to join one of the deep-space expeditions. Good for him, because Sam has been lying to him for years and never actually intended to join him on IO, like she promised she would.

When she finally decides to tell him the truth, it is only so she can jump Micah, who is still mourning the loss of his wife and also is likely twice her age. Sam is a great protagonist that inspires confidence and warm fuzzy feelings. Not least, because of the way she is portrayed. Margaret Qualley slurs her words, uses an accent that some of the viewers of my viewing party found excruciatingly painful (I myself found it bareable) and never changes her facial expression. This could very well be the script and direction, as Anthonie Mackie has never come across this lifeless before either. His performance was actually very good, considering he is far more lively in person, than he was in this film. It takes some serious acting skills to come across this flat and boring, when you are really nothing like this.

Both characters stayed on Earth, because Sam’s father, Henry, had pled with the population of Earth on the last show to ever air on TV, to stay on the planet and have faith in its future. Eventually, the two unrelatable characters decide to do what they should have done at the beginning of the film, which is to leave Earth and go to the launchsite.

The launchsite has been moved due to bad weather. Not even kidding. So, suddenly they don’t have enough fuel to go to the new launchsite (who even decides these things last minute and potentially murders the last people on Earth in the process?). But overcoming this daunting obstacle is actually super easy, barely an inconvenience. They just load the balloon onto their quadbikes, go into the same town Sam has already been to hundreds of times and get some extra fuel there. That part even happens off-screen.

What’s more important, is that while Micah saves the day off-screen, we spend some time with unlikable Sam. She always wanted to go to that one art exhibit at the Museum. Cause there’s no art on IO. We abandoned literally everything humanity cared about on Earth. So just once, she wants to see the art exhibit. As she walks in, she has a vision of flowers blooming in the garden, then wanders around the statues and paintings.

Eventually, Micah catches up with her, to remind her that she is running out of air, and they are both running out of time. She asks him about a particular painting, Leda and the Swan. He explains the story of Helen of Troy and before we know it, Sam decides that her dreams must become a reality and takes of her breathing mask. He lungs are instantly filled with poisonous air, but she claims she will be okay. She asks Micah to go and leave her behind, but to come back if she sends him a message that it is safe to come back.

The next scene is of Micah alone and sad in his balloon on the way to the launchsite. That’s it. We don’t see if he makes it, we don’t know what happens to Sam. Except, we then get to see the same dream sequence that Sam has had for years, where she feels the breeze on her skin, and listens to the waves crash against the beach she is standing on. There is only one difference, there is a small child running towards her. Her voice narrates that everything is great now and Micah should come back, because nature just happened to recover itself.

In other words, either Sam died then and there and this was her final dream, or she actually survived, despite this being scientifically impossible and had Micah’s child on her own and is now hoping for his return.

What is so really mindboggling about this ending, is its contradiction of itself. The entire film is based on the validity and importance of science, and the disasterous effects of climate change and the fact that humanity is doomed to kill itself, because we are a parasitic species. Here are the first lines from the opening of the film:

Sam: [narrating] It’s like we were doomed to destroy our planet. Some say it was because of the increasing pollution. I just call it human nature. A few scientists predicted what would happen. They started working on a power station that could be sent into space to harvest geothermal energy from other planets. But it was too late. People would start dying in their sleep… suffocating in the streets, the blood in their veins turning black. “An unexpected change in atmosphere composition,” they said. To me it was just our planet desperately trying to survive by kicking us out.

But the ending leads us to believe that science is not really that important, or even right and that while, sure, lots of people are going to die and climate change is going to wreak havoc with our society, we’ll just adapt and get on with things. Space exploration? Pff. Nonsense, who needs that? Earth is our home and we should just stay here and suffocate, just like Micah’s wife did…

In other words, IO doesn’t know what its actual message is and strings us along for 96 excruciating minutes, before revealing that it is all a bunch of mambojumbo, disguised as a sophisticated take on climate change. Hard pass.