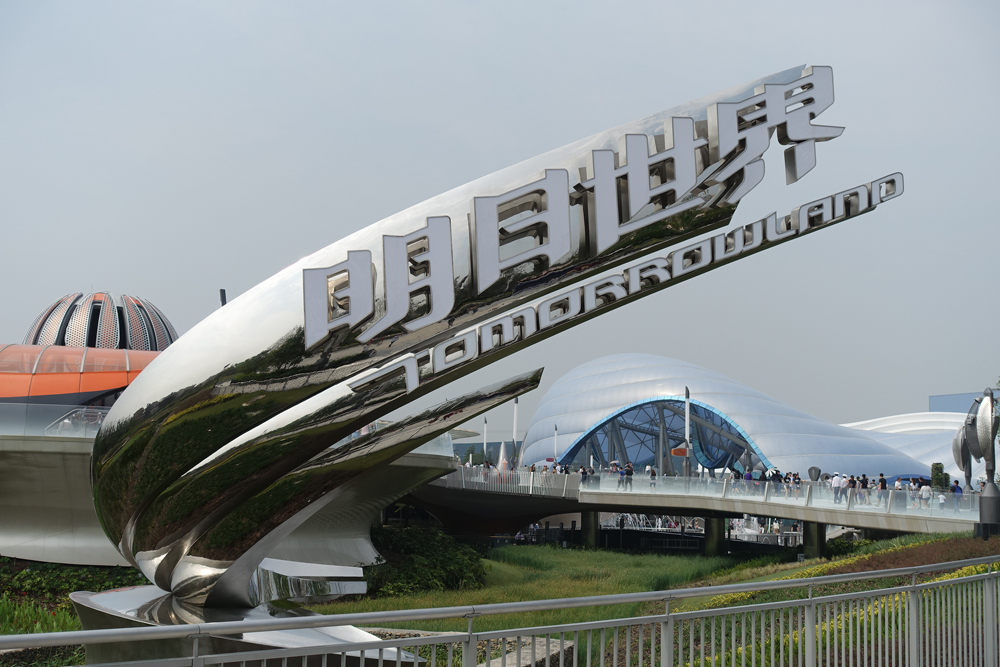 Tomorrowland (2015) is filled with amazing actors known from both the small and the big screen, though few get a lot of screentime. Even George Clooney who starts the film by addressing the audience with an ominous and cryptic message only returns to the screen halfway through the film. The viewer spends most time with Britt Robertson’s Casey Newton. Casey is the daughter of a rocket scientist, who is about to lose his job at NASA. Because while we love to constantly reference rocket sicence as the hardest and most amazing thing one could possibly do, it turns out, the world doesn’t really offer many jobs to rocket scientists at the moment… (some plot spoilers ahead)

This revelation, which shouldn’t really come as a surprise to anyone who has any idea of how little priority we give to our space programmes in the western hemisphere, sets the tone for the remainder of the film. It appears that many viewers disliked the film, because (once again) marketing made the trailers all about the utopian vision of Tommorrowland, setting up false expectations.
I never watched the trailers and so went into the film unbiased. All I knew, going in, was that there would be a lot of crazy CGI and weird inventions.
Casey is adamant about saving her dad’s job, as she loves that he works for NASA and hates that his talent and passion for his work will soon be wasted. She demonstrates that she too is hyperintelligent and looking for a way out; out of the misery that seems to be our existence in the 21st century. A fantastic montage shows how each class Casey takes in school just teaches her about the errors and threats of and to humanity and the impending doom that approaches us from all sides. Her frustration grows with each session and she raises her hand to ask a question. Only at the very end in the final session, does a teacher actually pay attention to her and lets her ask: Why? Why the hell is no one doing anything to stop any of the things that are going to wipe us all out? The teacher is stunned and saved by the bell. That sequence alone is woth gold in my opinion and stands out as one of the greater moments of the film.

Casey takes the initiative to save her dad’s job and uses her drone to hack the security cameras at Cape Canaveral and then proceeds to sabotage efforts to demolish the station (costing her father his job). It is a futile effort, her dad tells her, as would probably most viewers. But Casey is a defiant and determined teenager. When her first attempt at sabotage is rendered innert, she tries to sneak again, is discovered and arrested. This triggers a series of hillarious and shocking events that completely overwhelm her (and result in many annoying screams), eventually leading to her introduction to George Clooney’s Frank Walker. Walker is a disilusioned bitter old man, who is hyperintelligent and was already a great inventor as a boy. But he was kicked out of Tomorrowland for inventing something horrible and has now resigned himself to watching humanity kill itself.

Casey won’t have none of that and she tricks him into going outside, allowing her to sneak in and lock him outside his fortress home. Inside she finds his doomsday monitors and countdown clock, showing humanity’s extinction at a probability of 100%. He tells her the 3D vision hologram thing (don’t try to explain any of it, it’s not that kind of movie) of Tomorrowland she had was just a decade old ad. None of it was real anymore and she wasn’t special at all. There was nothing to be done, humanity would be destroyed very soon.

Casey refuses to believe that. She claims we are the architects of our own fate. Her outburst makes the monitors flicker and suddenly the probability of extinction goes won by a few decimals. Frank is bewildered and feels a new hope emerging inside him.

After another long action- and ridiculous invention-filled chase sequence, they finally end up in the dimension, Tomorrowland. As Frank tried to explain before, it is no longer what it once was. Parts of it are completely deserted and desolate. The great and hopeful vision of humanity’s future is no more.
Hugh Laurie’s Nix promptly arrives to arrest them, but Frank convinces him that Casey is special after all and can change the future. Nix leads them to Frank’s invention; a machine that allows us to see events on Earth through time. Casey scrolls into the future and sees the world on fire. It is completely uninhabitable. No matter where she points the lens, she just sees death and destruction.

For the first time ever, Casey loses hope. Why didn’t Frank just explain to her that the world was going to end in 58 days already and there was no way to avert their fate?
This time, Frank is the one who encourages her. He has seen the monitors flicker. He knows she can figure it out. Casey gathers herself and tries to come up with a plan.
But Nix doesn’t believe in her. He orders them both to be sent to a different dimension to wait out the end, which apparently has a tropical beach and ocean. Hugh Laurie delivers a fantastic monologue about the human condition. He used the machine to fill them with thoughts about the end of the world, about the apocalypse. Nix argues humanity doesn’t want to be saved. Instead of reacting to the message with action, it has embraced its end willingly and eagerly, by fantasising about it in books, films and video games and greedily working for their own individual profit, because the end was inevitable anyways.

Casey realises this is the problem. Nix is beaming negative thoughts to everyone, disheartening them and creating a self fulfilling prophecy. They have to shut down the device to allow humanity a fighting chance. The only way to ensure humanity survives and potentially eventually reaches the level we imagined in the vision of Tomorrowland, is to take the initiative. Be creative, think and do and don’t let anyone tell you our future is already written, because by resigning ourselves to failure, we are inviting it into our lives.

This is a very hopeful and powerful message in the very style we know and love from older Disney productions. A message that doesn’t carry with many people these days, because they are already disillusioned with the world and have given up. Those people will undoubtedly call this film childish or “teeny”. Which is why the message rings all the stronger in the company of all the dark, gritty and nihilistic films we have come to expect. In a way Tomorrowland feels like the antithesis to Star Wars: The Last Jedi, as the plot and character motivations are very similar, but the message is the exact opposite (although I believe by accident). This film is about hope, ingenuity and creativity, about living life rather than giving into despair and waiting for death to claim us. Take the time you have on this Earth to do something good and maybe, just maybe, it will pay off, but be apathetic and you can be sure your life will be just as miserable as you imagine it has to be.

I have also read some criticism that Tomorrowland shouldn’t be as desolate as Earth, because it was explained that the separate dimension would survive the destruction of Earth. This assumption is incorrect. Tomorrowland would also be affected, simply because they too had resigned themselves. Casey asked Nix “If you have know this was going to happen all along, why haven’t you started sending people to the other dimension to save them and start over?” Nix believes humanity is striving to doom itself and nothing can be done about it. If they brought more people to Tomorrowland, it would only destroy Tomorrowland too. It is best to let it all end. But in ending humanity on Earth, they also end Tomorrowland. Because no more people move there and those that already live there are resigned as well, giving them no incentive to invent new things or even procreate. So the state of Tomorrowland reflects the state of humanity as a whole, both metaphorically and literally. It also further illustrates the point of the power of the human mind. We are first introduced to the hopeful and wonderful world of Tomorrowland through the eyes of young Frank Walter. I remember catching myself saying out loud “I wish we really built a city like this”. Casey experiences that same emotion, as does probably every other child (and uncynical adult) during her own ad trip to Tomorrowland. “I want to go there!” If we accept that it cannot possibly happen, we never will be able to go there and we will be left with ashes and ruins instead.

Personally, I thought this film was wonderful. it was funny and had some really crazy visual scenes, as well as some very profound and emotional scenes, some of which I did not even touch upon in this review. The message resonates with me strongly, as I used to be very dark and gloomy about everything, but since I adopted a more positive outlook, my life has gotten better too. As such I can wholeheartedly subscribe to it and hope that one day, the amount of dreamers and creatives will outgrow the amount of naysayers and energy-vampires currently infesting the world.